Migraine awareness week – What are Migraine’s? 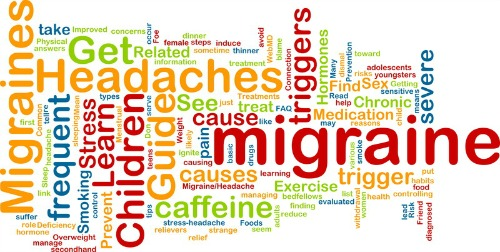 In aid of Migraine awareness week, we are exploring the information and science around this common and often debilitating  condition.

When someone has a migraine part of their brain gets over excited. Some neurons send more signals than they should, this stimulates surrounding neurons and a small wave of over-activity spreads across parts of the brain. This causes the Aura, which is actually a hallucination; these excited neurons are telling the person/brain about an external event that isn’t happening.

Most commonly the hallucination is a visual disturbance; flashing lights, blurry vision or tunnel vision, these hallucinations occur when the occipital lobe is affected, this region which processes vision.

There are several types of auras or hallucinations depending on where in the brain this wave of excitability occurs. If it is in the parietal lobe which processes sensation, one side of the body may tingle or go numb. Abdominal migraines occur when the insular cortex is affected, it processes signals from the digestive tract. Vestibular migraines cause sensations of severe spinning or vertigo, this is due to the cortex being affected, which you’ve probably guessed it, controls balance. There are other auras or hallucinations but these are the main ones.

So why does this cause a terrible headache? Well the wave of over excited neurons is called Cortical Spreading Depression. When this happens the neurons work really hard then run out of energy after a bit. An overused muscle has a build up of lactic acid which makes the muscle ache or even cramp. Similarly neurons release some chemicals when overworked, these stimulate the pain sensitive nerves (part of the trigeminal nerve) that wrap around the rich supply of blood vessels and capillaries in the brain.

So the migraine can start with the aura then the chemicals released by the fatigued neurons causes the trigemninal nerve to send pain signals. The trigeminal nerve covers the face as well as the internal blood vessels, this causes the awful head and face pain. Sometimes some neurons in the base of the brain stem get overstimulated as the pain worsens, if this happens they cause nausea and maybe vomiting.

Once the pain has passed the overworked neurons take time to recover, during this the individual often feels tired, unable to concentrate, do exercise or cope with much going on around them. This can last 1-2 days.

Some people are able to manage their migraines and symptoms in a variety of ways. Our following posts will explore some of these options…